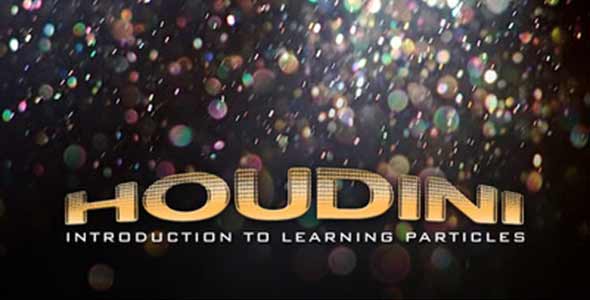 In collaboration with cmiVFX, sidefx training partner, I released an intro to particles in Houdini training course. It is a must have for everyone willing to take his first steps into Houdini’s particle system.

Now you can jump right into particle animation with this comprehensive guide for entry level Houdini artists. No matter if your migrating from another animation package, or learning Houdini from scratch, this video is a must have!

Everything has a beginning, and a particle network in Houdini always begins with the creation of the particles. You will learn in this chapter the first steps for creating particles. we will be using a location emitter to demonstrate how and where to create those particles.

In order to manipulate particles, the first parameters to change are in the the location node. Since it always begins with the creation, learning the parameters in this phase is a crucial achievement towards getting the most out of your project. During the explanation of the Location Node Parameters we also show the details view, an important place to visualize many of our particles parameters.

Particle placement can’t really exist without a simulation. In the POP Network Node, we can control some of the simulation parameters. In this chapter of the video, you will learn about the parameters of the POP Network, which will prove very useful in several situations.

Sometimes users may just need particles to begin from a certain point in time, after the beginning of the simulation. One simple and efficient way of achieving this is by using Initial State. In this section of the video, we will show how to import an initial state file, applying that to an example in which we will blow up a baseball bat into a number of smaller fruit bats.

Forces and dynamics are mandatory in order to drive simulations because they reproduce real life situations in a fast and easy way. Here we will begin with the gravity node and explain the basic forces based on this node. We will also show the property node, a very useful node that we will be using often later.

Fan and wind are two important force nodes that can help you achieve many cool effects. Randomizing things with noise creates a more organic style of movement then with velocity or force used alone. This part will explain in detail those 3 nodes and how to use them in order to continue the bat example. (ending it by blowing up the bat to small bats.)

Beside smoke, fire and other widely used visual effects, particles can serve to a different type of effect simulation. We combine and explain a bunch of nodes such as the orbit, torque, group, drag and more in order to create a not so common effect with particles: a planetary system.

This chapter is all about making the bubbles in a glass of soda with complete detail. We will make them appear on the inner surfaces of the glass, change size with age, and float to the surface where they will burst when colliding with the liquid surface. We then talk about the collision node which is used for the collision of the bubbles with the surface. Continuing, will also show how we can make our particles interact with rigid bodies and collide with them without using the collision node.

What’s life without color? Just an old black and white tv with bad reception. In this section, we will be using some of what we have learned in the previous sections to make an electric saw cut into a cube. Then we will learn how to give colors and alpha to the sparks emitting from the saw and change them with time. We show how we can use the render pop to change some of our particles attributes such as shape, and we will end up giving our particles some motion blur.

Sprites are a very important aspect of particle networks. They are fast, efficient, and allow you to create very interesting effects such as smoke, dust and more. This part will be dedicated to sprites, showing how to create them, color them, control alpha, and how you can attach textures or custom shaders to them all while setting them up for Mantra to render.

Georges Nakhle is 26 years old, lebanese, and has a masters degree in mechanical engineering. he has a wide artistic and scientific knowledge, he began his art steps with traditional painting and sculpting then gained a diploma in dramatic monologue (acting -singing), he has worked as a writer and performer in radio and TV. combining arts and science led him to CG, so he mastered many 3D tools such as Maya and Houdini, he’s also a programmer so he’s currently working for Dassault-Systemes in Paris-France and he had also worked in combination between Dassault-Systemes and mental images the makers of mental-ray. He is very picky about the details and he believes that every small detail contributes to the finished product.